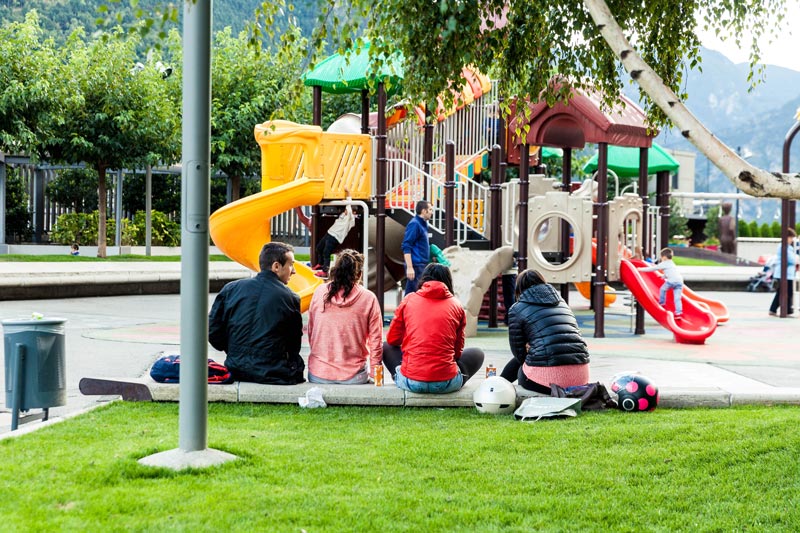 A few years after my son was diagnosed with autism, and I was in the thick of his early intervention treatment, his behavior therapist said something to me that still brings tears of gratitude to my eyes.

I had taken my son to her office, the first appointment of many on our schedule that day. The therapist admired a pin that I was wearing. Then she asked, “Was that pin already on your sweater when you put it on? Or did you actually take the time this morning to pick it out?”

In that small gesture, my son’s therapist let me know she appreciated how hectic and unmanageable my life often felt; that it didn’t exactly allow the time to choose the correct pin. (She was right…the pin just happened to be on the sweater.)

Her comment has stood out for me all these years later because it was such a heartfelt attempt to see me, to imagine what my life might be like. I struggle with so many things, but, so often, my struggles are invisible. For me, and many other parents of children on the autism spectrum, this lack of acknowledgment creates a painful sense of isolation and stress.

I remember a parent I will call Cathy, who spoke about one such moment: the seemingly (to the outside observer) easy act of taking her young autistic son to the playground. It was a beautiful fall day and when Cathy got there, she saw a group of parents, sitting and watching their children while drinking coffee and chatting with one another.

For most parents, a trip to the playground offers an opportunity to get a break. You can sit and watch your kid playing, and enjoy the fresh air. However, for parents like Cathy, playgrounds are anything but relaxing.

Instead of taking a seat with the other parents, Cathy was attempting to interest her son in playing with the other children. Cathy’s son, however, was completely obsessed with the tire swing. He repeatedly pushed it so it would spin in a particular way, and he would watch it, humming to himself, and flapping his arms. This was difficult enough for Cathy, but then, when some other kids came over to play on the tire swing, Cathy’s son began screaming. Cathy realized that she had to take him out of the playground before he had a complete meltdown.

As she carried her crying son to the car, Cathy saw the other parents, still sitting and drinking coffee. As she described it, “It was a horrible feeling, like I was drowning and waving my arms for help, but nobody noticed.”

Many of us with a child on the spectrum can relate to Cathy. You can be having such a hard time, trying to ward off any number of disasters, and no one really understands, much less recognizes, that you are struggling. After all, what is so tough about a visit to the playground?

I thought about Cathy when I went with my son to another seemingly innocuous and “fun” event: a bat mitzvah party for my niece.

For most kids, a bar or bat mitzvah party ensures a good time for all. At my niece’s party, for example, there were DJ’s playing music, a variety of line dances and fast-moving games, glow sticks and balloons, a photo booth, and all kinds of food. On top of that, there were lots of people milling around; guests trying to talk over the music, and kids running all over the place.

Those same qualities make a bat mitzvah party really difficult for kids on the spectrum like my son, who get overwhelmed when there is too much sensory stimulation.

What makes a bat mitzvah party even more precarious for my teenage son, however, is the presence of numerous and very cute 12 and 13-year-old girls. My son’s interest in girls is at once developmentally appropriate, and fraught with potential dangers. My husband and I know that, no matter where we take Noah, my normally slow-moving son will rush up, as if jet-propelled, to the prettiest girl in the room. He will stand way too close to her and begin an awkward or even nonsensical conversation; without recognizing signals that his attention might not be welcome.

So, once again, what appeared easy and fun on the surface—a party— was anything but. Just like Cathy at the playground, I felt like a soldier on duty, ready to intervene when necessary. My husband shared in this work, and we did a pretty good job of tag teaming, trying to ensure that our son’s interactions were appropriate. But I struggled with that familiar feeling of isolation, even at an event with lots of people around me. It was as if my husband and I inhabited one side of a split screen, looking longingly at the ease that other guests seemed to possess, but not able to share in it.

As it turned out, there were some things to celebrate that night. First, my son had no major mishaps. He even had some nice social exchanges. And another thing that helped was that a number of relatives and friends, while they weren’t able to help, let us know that they saw us on the other side of that screen. It might have been a smile or a hug, or just a statement of recognition that we couldn’t mingle the way we wanted to. But these gestures made a difference.

These are gestures of compassion.

My experiences as Noah’s parent have taught me a lot about compassion: the act of trying to understand someone else’s experience, even if it is outside of your own. Just making the attempt can go such a long way.

That is one of the reasons why therapeutic support groups for parents and grandparents are so empowering for participants. In these groups, parents can experience compassion in abundance, and relax, knowing that they are with people who will understand and not judge.

Of course, it is not just parents who could benefit from more compassion. We all thrive when we are truly recognized, even if that recognition is just a question about a pin on a sweater.

And that brings me to my son. There is always more room for me to truly see him, apart from my own worries and preconceptions. Often when I am struggling, he is doing just fine. That was certainly true during the bat mitzvah party. A very nice girl talked to him, and Noah has a wonderful photo to show for it, a picture of him standing with his arms around this girl and one of her friends. For my son, this was the very picture of happiness.